The Bitcoin price saw a new all-time high this week after the launch of the Bitcoin futures-backed ETF product. The price of BTC saw a high at $66,999 last week before dropping back to $66k.

The introduction of bitcoin-linked ETFs has been extremely beneficial to the cryptocurrency markets” and more money is flowing into the digital sector as more investors gain access to ETFs.

The new ETG has only launched but will see competition from a third Bitcoin futures exchange-traded fund with significantly lower management fees. VanEck filed a prospectus with the Securities and Exchange Commission on Saturday to launch its Bitcoin Strategy ETF “as soon as practicable.” The new futures ETF would be the cheapest Bitcoin fund on the market, with a management fee of 65 basis points.

“VanEck is excited to offer a long-awaited bitcoin exchange-traded product to the U.S. market,” said Ed Lopez, head at VanEck, in a statement. “We were the first asset manager to file for a bitcoin futures ETF back in 2017, and we are offering what would be most competitively priced ETF in the category when we come to market.”

ProShares’ Bitcoin Strategy ETF became the first US Bitcoin futures exchange-traded fund, launching on the New York Stock Exchange last Tuesday. The fund drew more than $1.1 billion within the first two days, with a management fee of 95 basis points. A price war may be looming already for the ETF market in Bitcoin.

Michael Sapir, CEO of ProShares, defended the fee to the Financial Times, saying the fund was actively managed, with ProShares’ traders “applying our expertise to roll the futures contracts,” rather than doing so automatically. Another competitor is the Valkyrie Bitcoin Strategy ETF, which debuted on the Nasdaq on Friday.

The price of THORChain’s RUNE coin was the best-performing coin of the week with gains of around 69% by Monday. The coin tested highs near $16 before retreating to $12.86.

Earlier this year, RUNE suffered a series of protocol exploits which led to $8 million being drained from its reserves. This week, the protocol announced that it would restart its Ethereum pool, along with other altcoin and BTC-based pools, which has seen strong support for the coin. 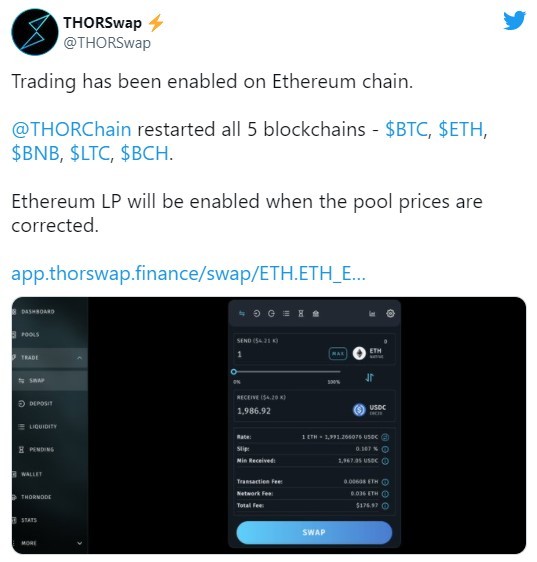 Trading activity was restricted immediately after the April hack, but it has now reopened across the five pools: Bitcoin (BTC), Litecoin (LTC), Binance Coin (BNB), Ethereum and Bitcoin Cash (BCH).

According to data provided by THORChain, demand for trading on the protocol was an instant $2 million in trading volume for ERC-20 tokens minutes after the pool re-opened.

With THORChain tantalizingly close to restarting in all of its multi blockchain glory, it’s time to look at some of the more exciting tokens on the Asgardian horizon. Once Ethereum is plugged back in, the ThorFi ecosystem is set to explode! 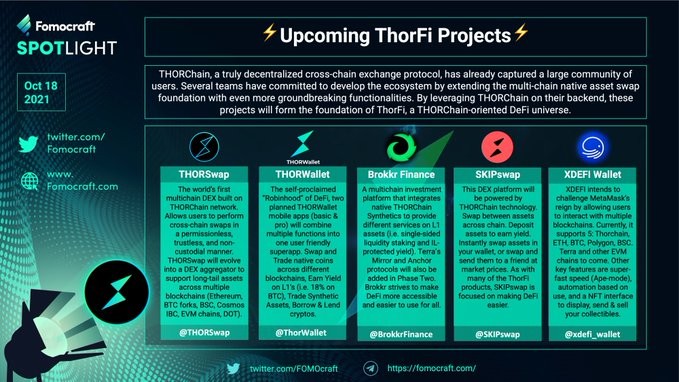 THORChain now trades at number 56 in the list of coins by market cap with a $2.9 billion valuation.

Stellar Lumens dipped on the week, but the coin is looking to build on good gains in October. The coin saw a new all-time high near $0.80 in May and trades 50% below that level.

The Stellar Lumens team signed a major deal with the international remittance company, MoneyGram International on October 6th. The Stellar Foundation will develop a payments bridge for the company that streamlines money transfers.

The platform will allow almost instant settlement in USD Coin. The USDC stablecoin is pegged to the US dollar and will allow exposure to the blockchain for MoneyGram.

This is an important event for XLM. Here is what Denelle Dixon, the CEO of the Stellar Development Foundation, said about the deal:

So this is just transformational in terms of being able to exchange crypto for fiat and fiat for crypto. We’re trying to go as big as we can.

MoneyGram’s network will be integrated with the Stellar blockchain to settle the USDC transactions, and United Texas Bank will act as the settlement bank between Circle and MoneyGram. The CEO of Moneygram, Alex Holmes, said this about the Stellar deal:

As crypto and digital currencies rise in prominence, we’re especially optimistic about the potential of stablecoins as a method to streamline cross-border payments.

Another recent boost for Stellar was the addition of a Grayscale Stellar Lumens Trust, which started trading on OTCQX, the highest market tier of OTC markets.

The XLM based Trust trades on OTCQX, the premium OTC desk under the symbol “GXLM.” Craig Salm, Grayscale’s Head of Legal, said:

This is an important milestone for digital currencies and demonstrates the continued maturation of the asset class.

Stablecoin framework is a near-term priority for Aussie regulators

ETH Price to Fall to $922 by December 10, Coincodex Predicts

Crypto Miners in Kazakhstan to Buy Only Surplus Power, Under Digital Assets Bill